“Cathedral Thinking” is a term now back in use, reminding us that idea pioneers and long-range thinkers have always been the ones who did today those things that would benefit future generations – be they grandchildren or fellow entrepreneurs or communities. Often, it is about designing something or creating a concept that will grow and develop and become more evolved given time – and eventually be instrumental in a new good, a gift to others.

Long before the concept came into vogue, two hospitality industry pioneers were Cathedral Thinkers in their own way, without ever intending to be.  Ellsworth Statler and Kemmons Wilson became hotel icons whose vision and innovations helped create much of the hotel industry landscape we know today – and they did it by putting in place foundation stones and a design that needed future generations to build upon their idea, and to enhance their commitment to bring it into a fullness that was enjoyed by people not born when they began their endeavour.

First there was Ellsworth M. Statler

Ellsworth Statler laid the foundation for modern customer service when, in 1907, he was the first to coin the vision “The customer is always right.” And as a hotel developer, he decreed a motto that would take years and generations to achieve a standard of acceptance. About his design for accommodation properties, he envisioned that hotels could be a place average income individuals could stay, where they could be rested. He saw them, done right, as a foundational part of the tourism industry that was in its infancy, barely defined.

Prior to the opening the Statler Hotel in Buffalo, NY in 1907, the U.S. hotel industry catered primarily to the wealthy.  Hotels designed to serve the middle class and below were mostly dark, drab, unclean properties offering poor quality food.  And it was common practice for innkeepers to achieve a “full house” by booking complete strangers as bedmates for all guests in double-bedded rooms.

Statler set out to establish a new order, and famously said: “All I want to do is to have more comforts and conveniences and serve better food than any of them have or do, and mine will be at a price ordinary people can afford.”  He set standards for comfort and cleanliness at moderate prices.

His Buffalo hotel heralded in newspapers, handbills, and on all available building side boards, “A room and a bath for a dollar and a half.” He was the first to design what became known as the “Statler plumbing shaft”, a common shaft that allowed bathrooms to be built back to back providing two bathrooms for almost the price of one.  Each room in the Buffalo Statler would have running water and a private bath – – the first in the USA to do so.

He introduced guest features that are so commonplace today including chilled water circulating to every bathroom, in-room telephones, keyholes under the doorknobs (for easier room access given poorly lighted hallways), wall light switches, full-size lighted closets, and a free newspaper delivered every morning.

Was Statler a long-term visionary? For sure. Was Statler a Cathedral Thinker? Absolutely.  Over generations for a century to come he established a chain of middle-class hotels, which set standards for comfort and cleanliness at moderate prices.

And then there was Kemmons Wilson

“Cathedral Thinkers” come in many fashions – but they have in common the ability to take a moment or an inflection point and set in place factors or actions that only time and history will show to have been visionary. The story goes that a Memphis, Tennessee real estate agent and homebuilder packed the family car and headed north on vacation in 1951 with five kids bound for the Cherry Blossom Festival in Washington, D.C. Wilson’s journey became “The vacation that changed the face of the American road,” wrote David Halberstam in his 1993 book “The Fifties.”

Post-war Americans had new interstate highways to travel with growing families and new discretionary money to spend.  Railroads were losing appeal and even the wealthy concurred that new air travel was too expensive.

And besides, gas was cheap (yes, true!), station wagons were a common family acquisition, and gas tanks were getting larger to enhance longer journeys. Cars were large enough to carry growing families (the new baby population grew by over four million a year).

That Memphis businessman was Kemmons Wilson and he was appalled by the tacky, unkempt and unpredictable motels found along the way. And he found inconsistent charging practices including the era’s then-common practice of adding a $2-per-child surcharge by some roadside motels.

Wilson found that galling because of his own common-sense approach to building houses: “The space in the middle of a house doesn’t cost anything,” he said. He reasoned that once the room was already rented, why should that room cost more if “a few kids are running around the space in the middle.” That trip led Wilson to his “Cathedral Thought”, to a vision. Wilson told his wife at the end of the vacation he was going to start his own hotel chain. And he laid the foundation of a plan that would take decades of times and generations of colleagues to bring to fruition. It was an ambition worthy of a Cathedral Thinker – doing something today that will take a long time to unfold, but doing today something that you know can be built upon in a strategic fashion, always improving – and always with a view to achieving a multi-generational vision. 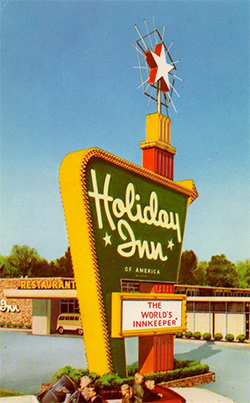 That experience, that vision led to today’s Intercontinental Hotels Group or IHG – – the parent company of Holiday Inns – – which boasts more than 4,000 properties worldwide today with more than 6,500 guest rooms.  IHG estimates 96 percent of Americans have stayed in a Holiday Inn at least once.

What Wilson launched in Memphis in 1952 became the business model for future roadside home-away-from home motels.  It was the ushering in of a new era of hospitality – – featuring so many perks that U.S. travelers now take for granted: air conditioning in every room, free parking, free ice, room rates charged by room and not by the number of guests, and very high cleanliness standards.

Wilson’s Holiday Inns continued trail blazing; by 1965 the chain had introduced the first of its kind national reservations system (Holidex) allowing a visitor to any Holiday Inn to make a confirmed reservation at any Holiday Inn location.  And followed Holidex with the launch of the very first ever call centers and 800 numbers.

Wilson maintained until his death in 2003 that most people wanted simplicity, quality and low-cost (McDonald’s Ray Kroc may have been a disciple of Wilson’s with what Kroc created in building his fast-food giant as well as a blueprint for successful franchising: “Make your franchisees millionaires before you become one”).  The Economist quoted Wilson as once saying, “You can cater to rich people, and I’ll take the rest. The good Lord made more of them.”

And let us close with another Wilson creed, one that is not uncommon amongst Cathedral Thinkers who know that the idea is but a start; serious work is required to make that idea something that future generations will feel compelled to build upon, continue and evolve. Wilson said: “I work only a half a day. It makes no difference which half. It can either be the first 12 hours or the last 12 hours.” 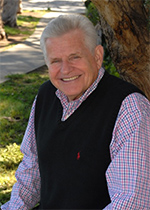